Woodlawn and Mother’s Day 1961 in Birmingham

I just watched the trailer for the movie Woodlawn and it brought back some vivid memories. I played football for Banks High School in Birmingham in the 60’s. That’s me, #80, talking to my linebacker coach, Coach Taylor, during a game.

Woodlawn was our arch-rival and I looked forward to that game each year. Usually, we played at Legion Field, but once when I was on the JV team, we played Woodlawn on the field behind their school. Much like one of the games in the movie, the field was muddy, but we won.  Shorty White, an Auburn graduate but admirer of Coach Bear Bryant, took over the football program at Banks in 1961 and began to build a juggernaut program that won back-to-back state championships in ’72 and ’73 and produced many collegiate and professional stars. In 1974, he coached undefeated Banks in the legendary game against the undefeated Woodlawn featured in the movie (for some reason, the movie does not have Banks as the opponent). Some 42,000 fans watched that game at Legion Field. Banks won but it would be the 100th win at Banks and last for Coach White; he left to take an assistant coach position with the Bear. When he retired, Banks held a reception for him; my name was on a billboard near the school on which Shorty listed all of his Bank’s players who had won athletic scholarships. I never thought of my Academy appointment as a scholarship, but he obviously did. 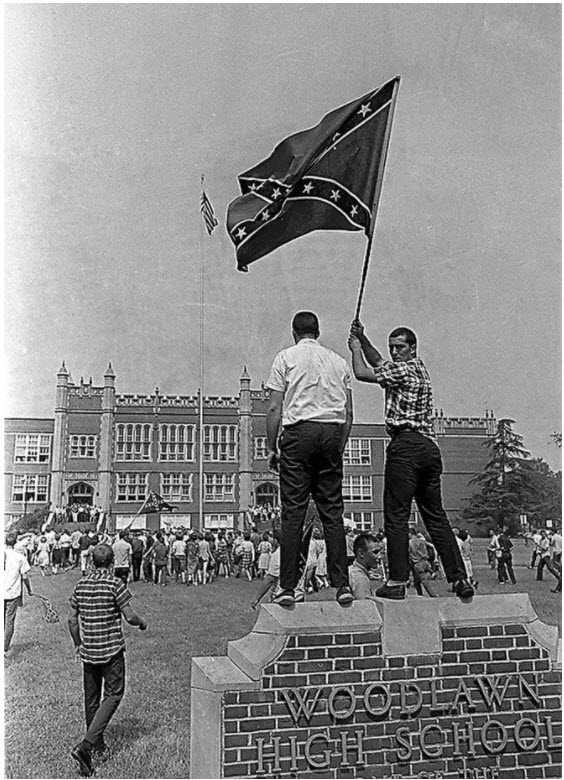 When I was at Banks, both schools had yet to be integrated in defiance of the federal law. Both schools and the football teams were lily-white and the idea that that would ever change was not remotely considered. There was only one city high school for all the city’s blacks, Parker, and they were never on our or any other white school’s schedule. That did not change until Coach White decided to play Parker in 1969. Things change even in Birmingham.

I have to admit that I was sucked into the racist mindset that was so dominant in Birmingham at the time. Even though the Supreme Court had ruled in 1954 all public schools had to be desecrated, nothing had really changed in Birmingham. In 1957, before Banks opened, students at many Birmingham high schools marched in defiance of integration. I was then only 12 and just vaguely aware of what was going on. In 1961, Bull O’Connor was our Commissioner of Public Safety was also an outspoken opponent of integration and tied tightly to the Klan.

I remember vividly the day the Freedom Riders rode the bus into Birmingham. Although talk of the coming integration was infrequent at Banks, a group of J. Fred Muggs’ members decided to go downtown to watch their arrival and being club vice president, I had to go with them. I didn’t know then that one of my friend’s fathers was in the Klan and had told him of what was to happen that day.

J. Fredd Muggs was, of course, the famous monkey sidekick of Dave Garroway of the Today show in the 50’s. He was a very smart chimpanzee and learned that, as long as the red light was lit on the camera shooting him, he could get away with acting out. Back then, all television was live and there was no way to cut out the tantrums, so they were shown often. Unfortunately, his tantrums got out of control as he got older and meaner. In 1957, the network dropped him from the cast. 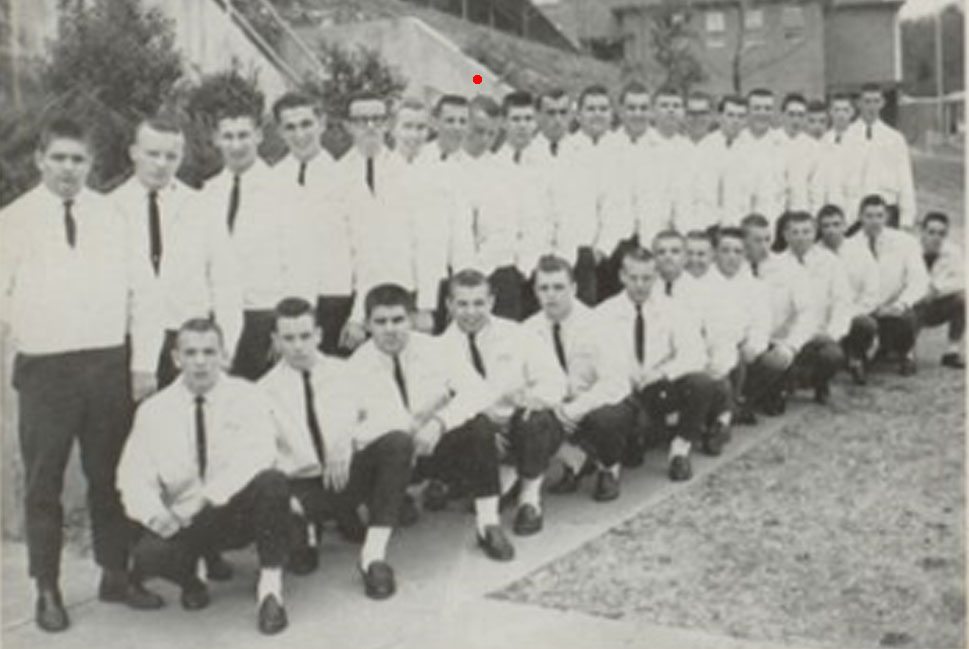 But to high school boys in 1960, he made the perfect mascot, so we created an exclusive club for the in-crowd at Banks. We were very selective and held a black-marble vote to pick potential members. We got that idea from the Mardi Gras Crews in Mobile, which were then of course highly segregated, and, to a large extent, still. Most of the members of the club were also football players. J. Fred Muggs disbanded in the late ‘60s rather than accept black members. In the photo from our Banks annual, I’m in the middle of the top row, under the red dot, and the only one looking down.

But that Mother’s Day in 1961, we were a strong club with a large following at Banks. We piled into our cars and drove raucously downtown. We parked on 19th street and 7th avenue and followed the relatively small crowd of angry white men toward the Greyhound bus station, proudly wearing our white J. Fred Muggs jackets. Coach White would have killed us if we had worn our letter sweaters.

I don’t really know what I was expecting to do or even to see. I didn’t really have a hatred of blacks. Like many Southerners, Negros were woven firmly into the fabric of my childhood. We always had black handymen working in our yards and doing odd jobs; we weren’t wealthy enough to have a maid or nanny. Earlier that year during February and March, I had spent many hours digging out the basement of my grandparents’ house on 85th street, overlooking the Banks football field, following the directions of Uncle Sam, an elderly black man of unknown years (he didn’t know when he was born). Sam and I ate supper together each day, though he refused to come inside the house and took his meal on the stoop. When I was a bit younger, I commuted across Birmingham by city bus and often sat behind the “Coloreds” sign just for fun – it was yet to be the problem it later became. 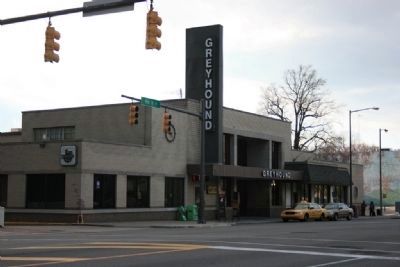 As we neared the Greyhound bus station, there were small groups of whites and a few blacks waiting for the Freedom riders. The segregation was obvious – angry, screaming whites on one side and a relatively small group of chanting and singing blacks on the other side of the street. Ordinarily, there should have been police on the streets, but I could not see one anywhere. I had also expected to see Ku Klux Klansmen in full regalia, but no white robes were to be seen. The only thing I noticed was that many of the whites had on white shirts. I didn’t know that Bull O’Connor had given his police the day off “to visit their mothers” and had made arrangements with the Klan to give them 15 minutes to do what they wanted to the Freedom Riders.

Suddenly, the crowd of whites began to lurch away from the Greyhound station and toward the Trailways station a couple of streets away. We and the small group of blacks followed. We didn’t then know then that the Freedom Riders had separated into two groups in Atlanta, one riding a Greyhound bus and the other on a Trailways bus. The group on the Greyhound had been attacked when they arrived at the bus station in Anniston for the normal stop, and again just outside Anniston where their bus was firebombed and destroyed. The remaining group, on the Trailways bus, were, of course, going to the Trailways station. Bull O’Connor had received late word of the attack and quickly forwarded the change in plans to the KKK and his staff.

As we neared the Trailways station, I began to notice that many of the men in white shirts were carrying clubs and chains, which they half-heartedly tried to hide. I guess I knew then they were the Klan and that something bad was going to happen. About 4 pm, some of the Klan entered the bus station lobby and shortly a bus appeared and entered the arrival area. We stayed outside on the street across from the station and joined in with the white crowd yelling terrible things at the blacks. But at least outside, the two groups remained separated. Inside, a riot erupted and what happened is a well-documented history. We did not know then exactly what was happening, but we could guess. And we joined with the taunts of the remaining whites outside.

The whole thing inside lasted only a few minutes. Suddenly, the group of whites outside broke and ran toward the singing blacks outside the station and began to beat them, using the sticks and ball bats and chains. I was frozen and could not really believe what I was seeing. The whites greatly outnumbered the blacks and, in short order, most of the blacks were on the ground bleeding. I was sick in the pit of my stomach. Until that moment, I did not really understand how much hate was in Birmingham.

Almost in synchrony, the riot and beatings stopped, and the whites began to run away from the station just as the sound of police sirens could be heard. I didn’t know then that was the Bull’s choreography.

I guessed it was time to leave too and I told my troop of Muggsters to run for our car, Glen T’s 57 Chevy. And we did. The car was eerily quiet on the way home. Glen let me off at our house on 9th avenue and I trudged up the stairs into the house, somewhat ashamed of having gone to the bus station. Later that night, the whole episode of the Freedom Riders in Alabama was on national news. I watched, still nauseous about what I had seen that day. I never did tell my mother we had been down at the bus station. She would have killed me. 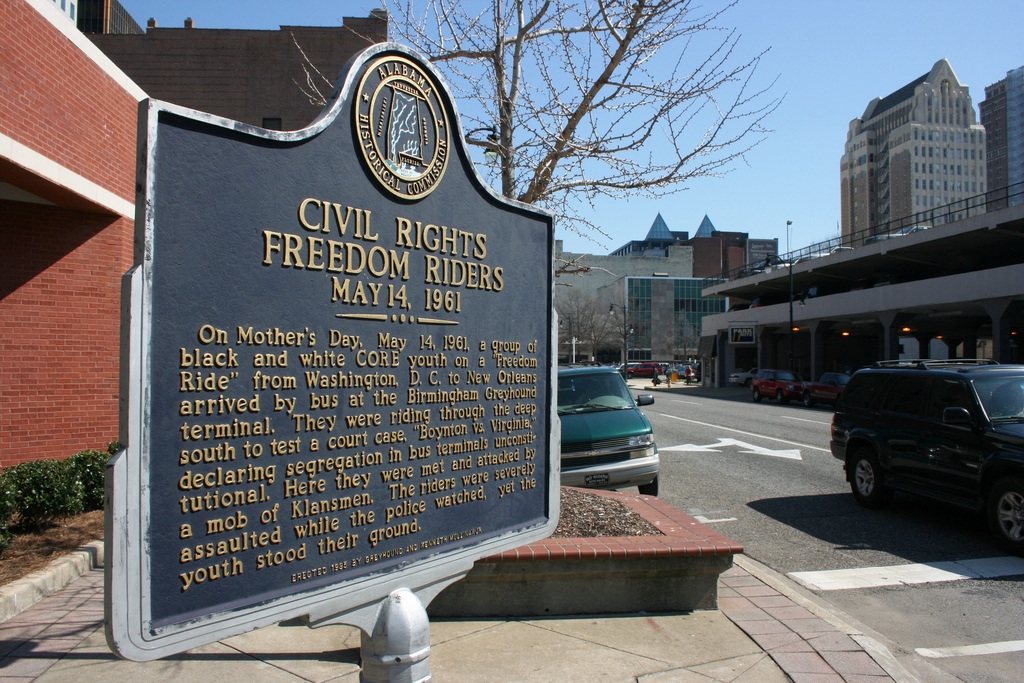