I met Jim just a few hours into my four years at the Air Force Academy. As the last step of induction, I was led by an upper classman (a “Firstie” or senior) to my dorm room on the top floor of Vandenberg Hall. When I entered the room, I saw Jim sitting at one of the two desks looking as stressed as I felt. Before I could even say hello, the firstie screamed “Get this room in order! I’ll be back in 30 minutes and this room better be ready. And somehow we made it.

That night, Jim and I talked long after lights out,
both of us in our beds in case a firstie tried to catch us out of bed. We told each other our histories and our dreams for the future. Both of us want to fly and we both were able to do that in the Air Force.

I remember with a smile one early Saturday Morning Inspection (a SAMI). We were assigned to the same table in Mitchell Hall (the Cadet Dining Hall) and an upper classman had insisted we each take a piece of fresh fruit with us back to our room. I know I for one was uncomfortable about doing this as upper classman were always looking for an excuse to chew out doolies. We hurried back to our room to go over it one more time before the start of the SAMI. We checked everything – tightened up our bed covers (so you could bounce a quarter off it), refolded the top underwear into a sharp 6×6 square, aligned our spare shoes, our tennis shoes (not yet called athletic or running shoes) and combat boots, making sure the shoes and boots gleamed.

Then we heard the call to attention – the start of the inspection. Jim and I assumed attention at our assigned spots and waited for the inspection team to get to our room. It was then that both Jim and I said “Shit!” We both noticed the remains of the fruit lying on top of the sink counter, a definite no-no and a sure way to earn demerits. I could hear steps in the hallway approaching our room, and since I was closer to the sink cabinet, Jim said quietly “Put them in the dirty laundry drawer.” Trash cans had to be empty and spotless. But we each had a sink drawer where we put our dirty laundry and covered it with a smoothed out laundry bag. So I jumped to the sink, pulled back my laundry bag, and pushed the fruit into the middle of the dirty laundry, and tried to smooth out the laundry bag on top.

I got back into position barely in time, for the inspection team arrived at our door a few seconds later. It was made up of our Air Officer Commanding (AOC), our Squadron Commander and our Flight Commander. The two firsties began their inspection while the AOC watched and asked Jim and I questions about how our doolie summer was going. I guess he was trying to take some of the pressure off us. And we almost make it. The two firsties could not find anything wrong and the AOC complemented us and turned to leave. But for some reason he stopped and looked at my dirty laundry drawer, which was cracked open a “hand width” as required. He walked over to it, looked down, and said “Mr. Wright. Why are there wrinkles in your laundry bag? Then to my squadron commander, Capt. Lodge, please inspect this laundry drawer.” Captain Lodge (See upcoming post about Robert Lodge, MIA) walked over, looked down, grimaced, and pulled off the laundry bag and threw it on the floor. Almost instantly, the unmistakable smell of a banana hit my nose. And also Captain Lodge’s nose as well. He put his hands down to the bottom of the drawer, picked up all my laundry, and threw it on the floor. 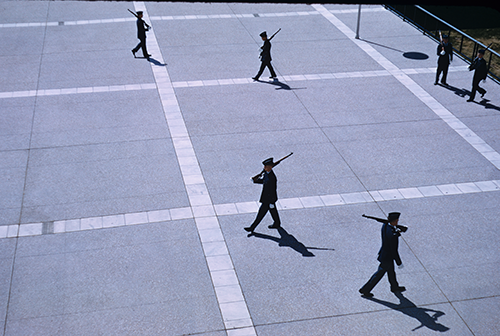 Of course my banana peel and Jim’s apple core were visible on the floor and all hell broke loose. That led to Jim and I walking the first of many “tours” that doolie summer. A “tour” was an hour spent marching at attention with our rifles back and forth across the terrazzo. I remember them fondly. 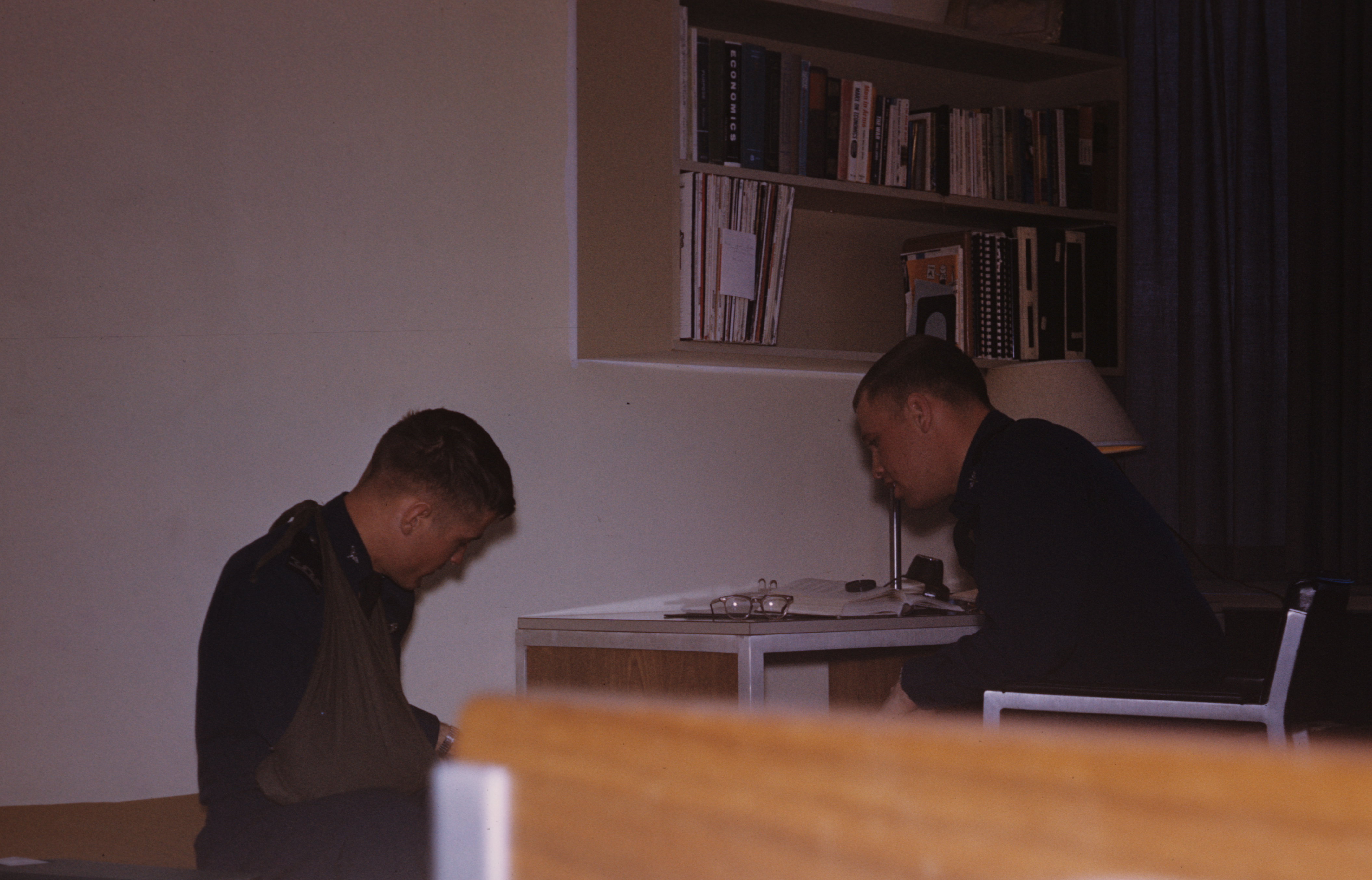 Even so Jim and I survived the summer and through the subsequent four years, though we only roomed together that summer of 1963. This is a photo of the two of us studying for an exam in our room. Jim’s arm injury came from an intramural rugby game we both played in.

Although we stayed good friends, we went our separate ways after graduation. Jim had not lost his good eyes and went to pilot training to earn his wings; I had just barely flunked the vision test and had to settle for navigator wings. But we both ended up in F4s.

In November 1971, I was still assigned to the 58th Tactical Fighter Squadron based at Eglin AFB in Florida, trying my best to find a way to get into pilot training (it was possible to get a waiver on eyesight problems once you had earned nav wings and had enough flying hours under your belt). The day after Thanksgiving, I learned Jim was MIA over Laos.

Jim had made it to the 8th Tac Fighter Wing at Ubon Royal Thai Air Base in Thailand, arriving there a few days after I was there delivering new F4E’s. He was flying a fast FAC mission at night over Laos. A FAC or forward air controller, was usually either an Air Force rated officer on the ground or flying a relatively slow light aircraft. A “Fast FAC” did the same job but in a fast mover instead; in Jim’s case, an F4D. Something happened during his mission and contact was lost. When he did not return to one of our air bases in SEA, he was presumed to be shot down and declared MIA, missing in action.

Jim is still MIA today as his remains have never been found. He left behind a wonderful wife, Penelope, a daughter, Karin, and a son, Michael. And a lot of friends.

He is “Gone but not Forgotten.” 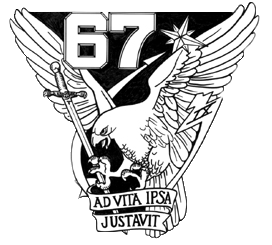